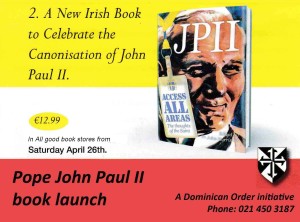 New Irish book on Pope John Paul II coming to a book store near you. “The intention of this volume is to introduce John Paul to a new public, a younger generation… this volume is a fitting tribute both to his memory and to the enduring effect of his papacy.” said Archbishop Charles Browne, Papal Nuncio to Ireland, who will launch the new publication in Knock Shrine on April 27th.

The reason for the timing, of the release, is John Paul’s canonization, by Pope Francis, that week-end, in Rome.

Nb* you will be redirected to our paypal account when purchasing online.